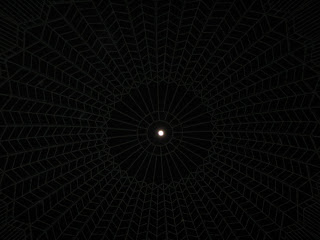 Blue Moon framed in the Rotunda at City Hall, Escondido. 12/09

At the tail end of Yuletide, as I summarized in my latest Tweet, my voice is changing.
It started on Wednesday, actually, when I had all I could take of the crappy day I'd been having, so I got into the car and screamed...and it was the first real scream that had emerged from me in many years.
See, pre-Soul Retrieval, I hadn't been able to let out a full-throated scream since I was a child; post-Retrieval, Lady M. had advised me she'd done a quick healingway on my throat. When I screamed on Wednesday, a circuit was finally reconnected, and a Shadow was chucked out.
After the scream, I "lost" my higher registers in my voice, and I had difficulty in singing. Full Voice I could not carry. The higher registers are returning, though, so I suspect the depth will as well; then I'll have Full Voice again. But some edge seems to be dissolving...

At the tail end of Yuletide, I worked a six-day week. New Year's Eve in particular was challenging, as Coyote totally had his way at my workplace (The Scottish folk call him "Murphy" - yep, it was a Murphy's Law day!) So that was the warning when I saw two of them running down the street one night early on in the Yuletide season!
After that hard a slog, it was time to go chillax, literally, at a party. So I did.
First Night awaited me, and did not disappoint.
I found myself something to eat: peppery fried rice with tofu & veggies, and a veggie eggroll. No hot dogs & funnel cake for this pagan! ;-) Hot chocolate was for dessert - delicious, even if I scalded most of my mouth in the process! (lol)
The main event for me, and for a lot of other peeps: a Namrock concert. Viz: 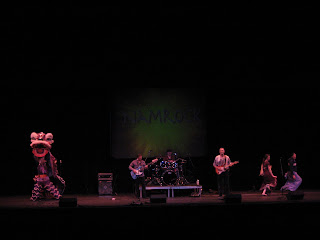 Not quite my cup of tea, but it was a very nice change of pace from what I used to listen to!

Throughout much of the concert, my attention was focused on this one gentleman to the left of the stage, dancing and dervishing along with the music. I was completely captivated by him; he made the experience that much more enjoyable for me, just by losing himself in his joy and expressing it openly. I thanked him after the concert was over for his beautiful dancing.

I went home before the midnight fireworks, truth be told, because I was compelled to set off some "fireworks" of my own. I danced in the new year in the privacy (and warmth!) of my living room, bringing in my vision for the New Year into material form through the sacred movement of my own body. I did my own version of dervishing, I suppose!

With the dawning of this day, Yuletide having reached its graceful conclusion, I breathed a sigh of relief. I am safely arrived in 2010, as are we all. Huzzah.
Posted by Victoria SkyDancer at 12:22 AM