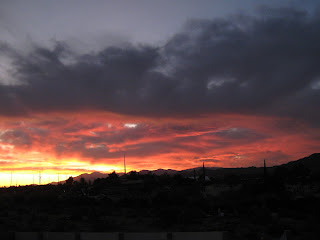 As fun as the retreats are, transitioning back into "normal space" from them can be a bitch & a half.

Three retreats, three transitions:
The first transition was a physical one - I had eaten raw food for five days straight to start the New Year in January; I had been rather nicely vegetarian - nearly vegan - afterwards. When I got back, I needed a degree of stillness for my body to catch up to all of the Work I had done energetically...believe me, when you get struck by lightning, you find a LOT of Work is done upon you! Some of the changes you don't even realize have been wrought within you until you're days, weeks, even removed from the time you were catalyzed! (I know several people who are nodding their heads in vigorous agreement with this one...y'all know who you are...) ;-)

The second transition was a mental/emotional one - I found myself needing to do some very serious course correction in myself and my plans when Coyote came to me and showed me I was acting and reacting based on illusions I'd built up in my head. The Trickster's teachings may be harsh, but more often than not, "tough love" is exactly what's called for; it certainly was for me! So I did some Shadow-work, and shape-shifting, and succeeded in bringing about a LOT of healing for myself as summer ended and autumn began...Work that stood me in very good stead prior to the October retreat!

The third transition has been a emotional/spiritual one - I found myself in an "altered state" of consciousness for an entire week after the retreat...feeling "here," yet not completely "here." (Others reading this entry will know exactly what I'm talking about; for the rest, bear with me.) The first day of November, I came back fully into "normal space." Hard. It was like waking up in the center of the faerie ring and finding myself completely alone; more, finding myself in the middle of a land of ashes and dust. Let's just say the first few days going back to (muggle) work were rather challenging for me, to stay centered!
Part of the situation was that I had brought a lot of my integrative journey this year to a point of completion...part of it was that very deep, primal Shadows were finally moving to the center of my awareness; they would no longer be ignored. Judgment, Rejection, Mortality - these are the scars that are in my be*ing, that are needing very much to be healed before I can move on, move into Right Relationship, in an open and intimate way, with a Beloved.

Along with this Shadow comes the knowledge that I have reached the point where I can no longer do the Work I need to do by myself. I need others to help me. So I am reaching out, and getting responses, getting assistance. One of the things I will be guided to do in the near future is a session of Soul Retrieval...the Gateway through which I passed from girl to Maiden was wrought with much trauma and drama, and this is a point where I know there are missing pieces to my personal puzzle. It's high time I go find them!

This is the best time of year for me, or anyone else for that matter, to do this sort of deep, dark Work...for this is the time of Descent, when natural forces are going within, going underground, bedding down and entering the Dreamtime. This is the time to follow in the footsteps of Inanna and Persephone, early shamanic archetypes, as they journeyed to the Underworld in their own personal quests. This is not my first journey of Descent, either; the first time, I began in 2003 and would not "return above" for a bit more than a year (in 2004). This time, though, promises to be much briefer...after which, maybe I'll be a wee bit more talkative in cyberspace. ;-)
Maybe. (lol)
Posted by Victoria SkyDancer at 10:58 PM