Ceremony for the Departed 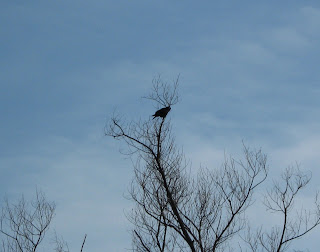 As always, the crows attend me in my exploits. 2/10

One thing I have to keep in mind as a Shamanic Priestess: I must be ready for anything, at any time.
Just this Friday past, I learned the stunning news that two of my Internet friends has passed away rather suddenly and unexpectedly. Just because I may be more comfortable with the idea of death than some, and just because I can track rather well what is going on...these things don't necessarily make it easier for me when something like this happens. The ceremony to be performed, however, came together for me very quickly. Today, Sunday, I carried out an Honoringway for both of them. 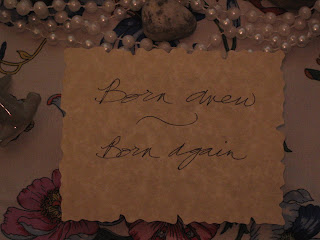 The names of my Net-friends are on the back of this paper. The strings of beads at the top of the photo are a pair of white necklaces, which I used as my offerings, as you shall see.

With a black boa draped around my shoulders (a gift from one of my now late Net-friends), I went to my destination: Kit Carson Park in Escondido. 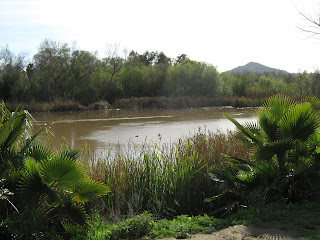 It is a charming mix of cultivated park and unblemished Nature...

I caught sight of my ultimate destination soon enough: Queen Califia's Magical Circle, a massive sculpture garden by an artist named Nikki de Saint-Phalle. (I've had the spelling corrected. Thanks to my sister Nikki-phile!) ;-) 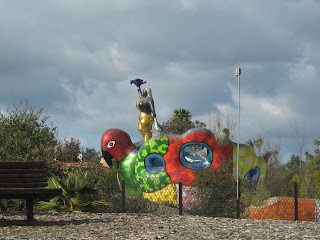 The Amazon Queen upon her mount, a crow alight upon her upraised hand...

The last time I had visited this place was when I had re-married myself, in 2004. Someday I may share that story... 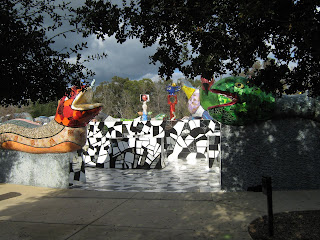 The entrance to the massive sculpture garden.
What this doesn't show is all the people who were present on this day. I hesitated at first, then proceeded anyway. I can move like the fox when I need to, which is to say, barely noticed at all. ;-)

I was first drawn to this statue: 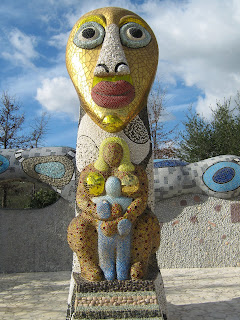 She spoke of rebirth to me - a feeling confirmed after I went around behind her and meditated briefly. When I looked up and beheld the symbol...well, it was a perfect photo-op! 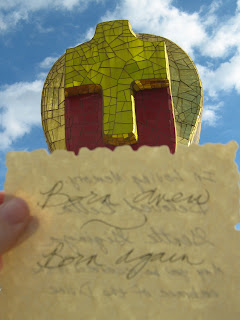 It was a statue directly across the "courtyard" from my rebirth one that caught my eye next, as a perfect place to hang the necklaces I was wearing... 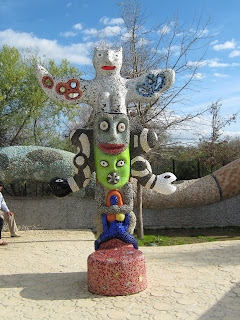 Two snakes, two necklaces...need I say more?
So, a little meditation on the sitting nook, and then the adornment: 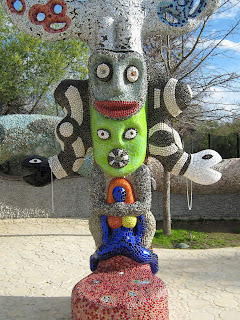 Note the necklaces now hanging on the snakes. I fully expect some child, or children, will take them home eventually...and that will be just fine. 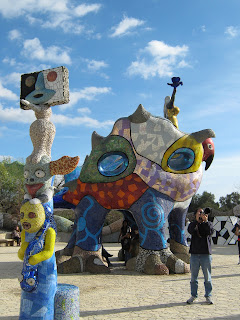 Queen Califia and her mount are at the center of the garden. Beneath the beast's feet is a sculpture of a large cracking egg, which is a fountain during certain times of the year. You bet your bippy I included the egg in my ceremony! ;-) 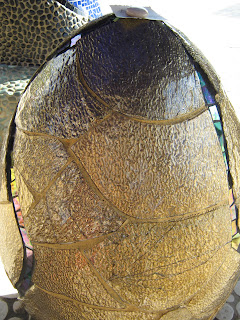 The egg-fountain, with the requiem-paper anchored atop it by a stone heart...which is filled with number-one good juju.

The space underneath the beast is like a cave unto itself, with hidden treasures... 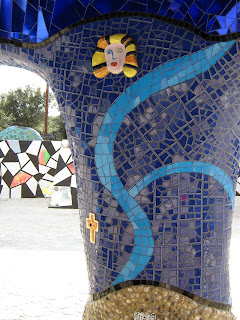 One leg of the beast, with a weeping woman and a cross. Perfect symbology. 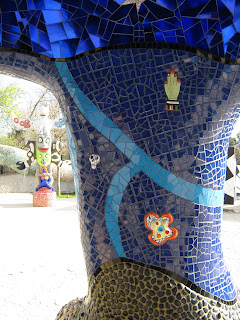 A second leg of the beast, with the offerings in the distance.

And the belly of the beast itself is a beautiful deep blue glass mosaic. A tiny sliver of it, providing a graceful conclusion to this chronicle of my ceremony: 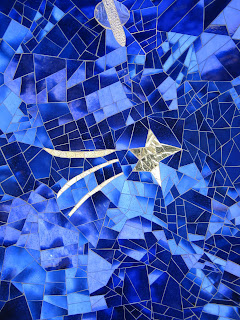 Like the Shooting Star...
Here one moment,
Gone the next
(Perhaps too soon!)
But while you were here,
Ah! How beautiful
Ah! How Beauty*Full!
My blessings and love to all who were, and are, affected by the passings of these two brilliant stars in our firmament. As long as they live in our hearts, though, they will live forever.
A-ho.
Posted by Victoria SkyDancer at 11:08 PM