Getting rather "political" with purple thoughts...

{Disclaimer: now and again I'm going to comment on what's going on in the greater world. This is a "political post" and I'm expressing my opinion. This is my opinion only; agree or not as you choose. Be advised as well that while disagreement is perfectly expected and acceptable, venemous responses will be deleted. Now, onto the post.} 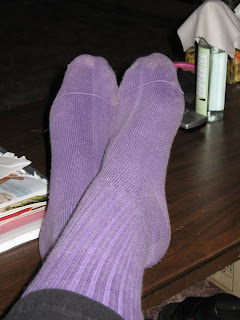 Today has many different names, but the theme behind these names is the same: bullying, especially homophobic bullying, is Not Acceptable anymore in this day and age. Many are wearing purple today to support those who don't fit into the hetero mold; I would be one of the purple people.
Now I'm going to take this issue and raise the controversy level several notches... ;-)

A lot of attention has been focused on those who have been bullied, and rightly so. But what about those who are doing the bullying? This side of the equation also needs to be looked at, folks!
A bully acts out from fear, pure and simple - the fear that is roiling about in the bully's soul like a stormy sea. Where does this fear come from?
In many cases, the bully's home life is chaotic...perhaps from divorce, or from parents who are addicted to various substances, or from an abusive family member. In this case, the bully is so stuck in fear that s/he projects this fear onto others as a coping mechanism. "If I'm miserable, I'm going to make everyone around me miserable too, so I won't be alone anymore," goes this thought. In this instance, bullying is actually a cry for help; the bully is looking for safety and security.
In many other cases, though, the bully is carrying the fear of his/her parents and parroting their beliefs. Prejudice, Judgment, Hate, Malice...these are some of the sentiments that can be handed down from parent to child as easily as a lamp, a bag of marbles, or anything else that can be called an "heirloom." Here, the bully needs to be shown that the beliefs they've been given aren't the be-all and end-all in the world; this happens through education.
Now, I'm not saying bullies shouldn't be punished for their actions; if they break rules and/or laws, they need to face the consequences and be held accountable. However, perhaps we can show a little less Judgment and a little more Compassion in our dealings with bullies, as we already do with the victim/s of bullying.

Now for the meat in the enchilada...
These episodes of homophobic bullying dovetail with the controversy over "Don't ask, don't tell" in the military, the issue of gay marriage, and half a dozen other things I could come up with if I took a moment and skimmed the news. The point is - the old paradigm of "boy + girl" is being blown up and revised to its simplest denominator: Love Between Two Souls. The reason that this is twisting a lot of knickers around the world is very simple...it all boils down to sex.
It's time to quit pussyfooting around the issue and name the paradigm that's driven what we call "civilization" for several thousand years: If you control the sexual activity, you control the tribe. This is why humanity shifted from matrilineal inheritance (what you got depended on who your mother was) to patrilineal inheritance (what you get depends on who your father is). This is the reason that birth control and women's reproductive freedom is opposed by certain significant groups. This is why the sacred aspects of sexuality are ignored at best, and censored at worst. This is the source of so many of the "double-standards" that govern men's vs. women's behavior, appearance, and so forth.
This is also why there's homophobia in the first place...you see, "queer" sexuality is actually the mark of one who has been "touched by the gods" in many indigenous tribes. The "queer" individuals in the tribe were often the shamans of the tribe - and competition for those who were/are looking to control the masses! Any behavior that is regarded "outside the norm" is thus regarded as a threat to the dominant power structure; those in power will use every means at their disposal, including violence and the threat of violence, to stay in control.

It's time to call the bluff of the old paradigms that are dying right now. It's time to look beyond the fear-mongers and stand strong in Authenticity. It's time to meet Fear with Love - for Love cannot be stopped or destroyed. It's time to tell the power-over dominators what they can do with their illusions.
It's time to wake up and unplug...NOW.
Posted by Victoria SkyDancer at 4:35 PM