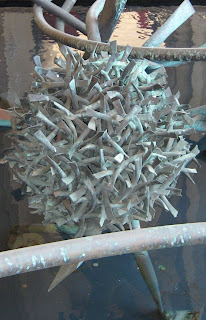 Whether I'm cutting out images from catalogs or snapping pics with my camera, every now and again I come across something that moves me, and I need to capture it. I might not know why at that moment, but it becomes the perfect image to use in the fullness of time.
The image above would be a good example. It spoke to me about a year ago, but it's only now that I understand the message...

The closer we've come to the "Cardinal Cross" alignment in the sky (an alignment formed by Mercury, Jupiter, Saturn, Uranus, and Pluto this weekend, lasting until the first week of August), the more antsy I've been. These last two weeks in particular have felt like a collective holding of breath, waiting for the massive surge of energy that is predicted to course through & by our planet, and all who inhabit her, as a result. Or as I tweeted recently: The whole Universe feels Void of Course and I feel like I'm experiencing a bout of Cosmic PMS! ;-)

Several of my friends say I wasn't too far off...
By degrees I've been brought low as of late, feeling various levels of doubt, frustration, anxiety, even incompetence and powerlessness. My first clue was in recognizing the last time I'd felt such "blah" energies was before I had embarked on my Journey of Spirit; in other words, when I still thought myself a muggle, to use JK Rowling's lovely terminology. :-) My second clue was in recognizing when my Indigo Diva was having a tantrum, insisting that life should be unfolding on HER terms, and feeling very rigid.
I realized: I am clearing out my third chakra, the energy node found at the solar plexus, connected with thoughts of individuality. This is where I hold all beliefs about My*Self; these are the Shadows that are being brought up for me to recognize and release.
A multi-step ritual spontaneously arose within me - I'm unfolding it one night at a time as we speak, with the next steps beginning to come together as I conclude this part of it.

In this time of surging energy and Waking Up, I find myself shedding the last vestiges of who I was...a Sleepwalker in the Nightmare of the Shadow-Matrix. Many others will be releasing these dregs as well; others will be at the beginning of the process, realizing that all the blood and thunder playing out around them is one Grand Illusion, and that Something Far Greater lies just beneath the surface. Many people are experiencing this awakening as a very rude one - this is a "necessary evil," if you will, for many people have been caught in the grips of the Nightmare and sleepwalking their way through life for a very long time.

The alarm clock is going off.
It's time to Wake Up - NOW!
Posted by Victoria SkyDancer at 3:51 PM