So let this be an explanation of what happened around that date, and what has unfolded since, to go with my semi-cryptic status posts on Facebook... ;-)

I had planned out some ceremonial work to do on 11/11/11, to go along with the great gathering of energy. I also had a sense, truth be told, that I wasn't going to be at home when the portal opened. At first, I thought I would be attending a women's conference in Los Angeles; at the last moment, though, I was advised by my guides NOT to participate, so I let the opportunity pass. Not entirely sure what was going on, I waited - and two days later, my ultimate destination became clear. I was needed in Las Vegas. So I packed my duffle, got behind the wheel of White Lightning, and off I went.

That Friday saw me wandering in the desert just outside of Las Vegas. Viz: 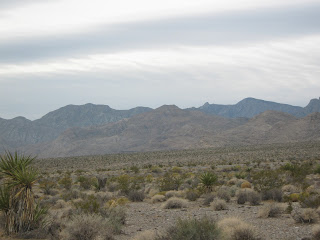 During my wanderings, I had an opportunity to commune briefly with one of the stones on the ground. It was a fairly large white stone, with a place for me to rest my hand. I would like to think that I joined energy with that stone right at 11:11 am; without a watch to confirm, I have no idea. ;-) 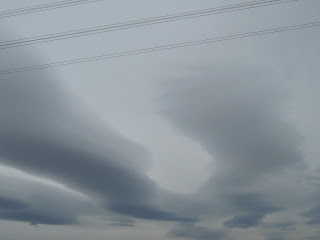 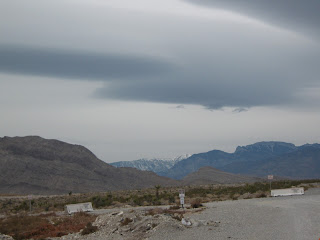 There were some very interesting cloud formations overhead, especially in the morning. What I didn't take a picture of was the Vegas Strip surrounded by an odd, pea-soup like smog. Was I seeing the effects of a cleansing, or was I seeing into another reality? I'm still debating that one.

I returned home Friday evening. Saturday morning (11/12), I felt a HUGE difference in energy in the house...I was on a completely different level than anyone else residing here! It was very uncomfortable for me, and I found myself stepping into Bear Medicine. Momma Bear growled at anyone if they came too close for comfort!
I found myself shielding very heavily against the very low vibration at home. Relief came when I stepped out into Nature, which I did on Sunday (11/13) to enact the ceremony I had planned to do two days earlier. I felt myself plugging back into the New Reality as I visited the power spots scattered through Kit Carson Park.
Honestly, I've never seen so many crows in one place in my life - these and many more followed me through my ceremony. I felt truly protected - and blessed - by their presence.

I'll be honest with y'all - there's a lot shifting within me right at the moment. I'm feeling sea changes coming my way, so significantly that I'm going to unplug from cyberspace and take a Virtual Walkabout during the Second Unfolding, which starts on December 11th. I feel the need to gain some clarity as to what I'm supposed to do next, and when I need to take action. Depending on what other rhythms I tune into, that Virtual Walkabout might also turn into a real one. We shall see.

I feel that significant parts of my life-story are coming to an end, to make way for new beginnings...

Posted by Victoria SkyDancer at 5:21 PM