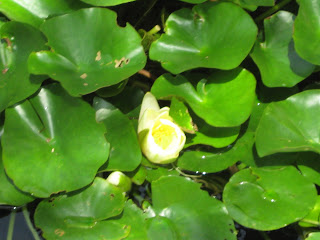 1971: A petite woman is in the hospital, trying her best to birth a "normal-sized" baby. The doctors are monitoring her closely. They suddenly notice the baby is in distress. They make an instant decision to go get the baby.
Thusly did I come into the world as Julius Caesar is supposed to have entered it...they cut mom open and pulled me out. (now you know why it's called a caesarian section!)

1999: A woman enters a park close to her home, a park that is partly cultivated, but mostly "feral." She wanders about with her walking-stick until she finds a tree besides a slow-moving stream. She plants the end of the walking-stick among the tree's roots, and sits at its base. She reads aloud a statement she found in a book about Wicca, then adds her own words. She sits in silence before and after she speaks aloud. Then she leaves, seemingly unchanged. ;-)
Thusly did I dedicate myself to following the ways of Grandmother Earth and Grandfather Sky, and chose to adopt a new spritual path, after free-floating for several years outside the comfy confines of the scientific laboratory. Little did I know where this path would lead me...!

2009: A woman drives up to a house decorated for Christmas. She rings the bell and is greeted by a shamanka she recently (re-)connected with. The two women go out into the backyard, into a screened-in space. The first woman talks; the second woman listens. Then she uses her rattle and goes on a journey into the Dreamtime, while awake. She tracks down three "lost" pieces of soul, which she brings back and blows into the first woman's body. She relates the stories of these three pieces, and the other Work she did in the astral. The first woman cries, and smiles, and nods. Eventually, they return to the home and part ways, for now...
This is the barest sketch of what happened when I visited Lady~M. and had my Soul Retrieval experience. In truth, I don't feel a whole lot different, but that's only because I've done so much Work on my own. I have, however, noticed that I look different - I seem to be a bit softer, a bit more femme, when I behold my own reflection.
Also, when I was out walking today, I also felt the difference in my energy: the crazy patchwork of sometimes conficting shielding that had surrounded me was gone; stripped away, with full permission. Now, there is an openness, yet I'm still very solid and protected.

On some levels, the Work is now done. On others, it has just begun. (again.) ;-)
Let the shape shift subtly, yet let the result be profound...
Posted by Victoria SkyDancer at 10:58 PM