I love this pic of the tree covered in Spanish Moss. I had no idea how I was going to use it, until now...

Between Imbolc and the new moon, I experienced a major realignment. It was as subtle as my first Big Glow retreat experience had been dynamic, but both experiences served to split me open to my very core. I found myself unable - no, more like unwilling - to be a Social Butterfly. I really and truly needed to unplug for a time from the hoopla generated by the Wacky Tribe of Apes who call themselves human. So, once I had fulfilled my final "social obligation" last Saturday, I disconnected.
For a week, I limited my computer time to checking my email only...no Social Media sites, no Ning sites, no Forum sites, NADA. I also kept my "realspace" interactions to a minimum as well. Instead, I read a lot; mostly some of my books on Taoism. I puttered around in my newly cleared patio a lot, bringing some much needed order to what had been previously been overrun by chaos. I also went to my new fave place in Nature, Kit Carson Park.
(What, you think I'd pass up an opportunity to plug upcoming Awesomeness from my Home Tribe? Shut yo' mouth! LOL)

While at ze Park...
I completely "geeked out" every time I saw, or heard, the sound of running water. This may seem strange, until I explain that I live next door to a farking desert, and the sight/sound of water is a rare and precious thing to behold in SoCal. ;-) 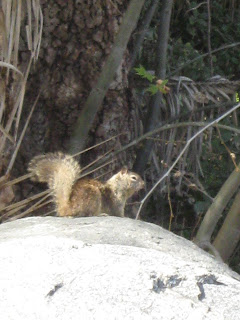 I shared some meditation time with this squirrel. Right here, he's in the middle of a complicated "semaphore" display with his tail. I think he was telling the other squirrels, "Road busy! Do not cross!"

I also visited my version of Walden Pond, known here as "Sand Lake," to commune with the ducks, coots, and other waterfowl.

It is most felicitous I chose to focus on reading my Taoism books at this point, for the Information that I "uploaded" into my brain percolated in my psyche and brought me to the second significant A-HA! moment I've experienced this year.

See, right before Yule this past December, I had my first A-HA! moment while attending a presentation/ceremony at the Goddess Temple of Orange County. The presenter was a fascinating woman named Dr. Marguerite Rigoglioso, who is sharing ideas that will either thrill you or scare you, depending on your perspective. (Click on her name to get an idea of what I'm talking about.) I experienced a massive dose of the former, especially as I saw my entire life rearrange itself before my awareness as she spoke!
The A-HA! moment unfolding at Imbolc, I'm choosing to call The Great Thaw - I felt a lot of artificial restriction melting within me and flooding out of me. There was one day, in fact, where I could not stop crying. I was definitely a Hot Mess for a time!
Both of these significant episodes have led me to adapt new operating paradigms in my life - paradigms that don't start with, or contain, any sort of "Something Is Wrong With/in Me" message hidden in them. Paradigms that show me how my life could not have unfolded in any other way than it has - and that way has been the most perfect, and most felicitous, for me to travel...even when I've thought otherwise!

Ten years ago, I chose to follow the Path of the Priestess when I was initiated into Wicca at Imbolc. (Yup, in 2001. Gods, but that seems like a lifetime ago!) Ten years ago, I thought I knew what that meant - but I didn't even grasp a fraction of it! Not until I've wrestled with my deepest Shadows and seen them blink. Not until I've had my life spun around several times over. Not until I've been cracked open to my core so that I could grow even bigger than before.
So what does all of this mean?

It means that, in this moment at least, my life is unfolding in a very ancient and traditional pattern, as the Priestess who is a part of her Society/Community, but significantly holds herself apart from it. This was the paradox that was giving me fits, until I realized its truth: being A Part, vs. being Apart, is not an either/or proposition! It's a both/and proposition, as I flow between Activity and Rest. That was a HUGE relief to realize!
It means that I've allowed myself to get too caught up in labels, definitions, measurements, schedules, agendas, and a whole bunch of Structure which, in truth, was really Restriction! So I've gone and chucked it ALL out the window! For at least the forseeable future, my life and activities will flow from the answer to this one question: Does this arise from, and/or support, my Authenticity, with Integrity to My*Self? If the answer is Yes, I'll take action; if No, I'll take no action. Wu-wei, baby!
It also means that I'm not going to be as active online as I used to be. My blogs will still continue to exist; they, in fact, are going to be my top priorities. As for the social stuff - I'll respond promptly if it's urgent; otherwise, you'll hear from me eventually. Capice? ;-)

I feel there's more of a depth to my be*ing than there was previously. Initially, I felt that certain of my energies, namely my feminine/yin energies, were "stunted" in relation to my masculine/yang energies. Now I can see that all I really need to do is honor and move with the yin as I have honored and moved with the yang. It's simply a matter of recognition, yo.

Posted by Victoria SkyDancer at 9:37 PM